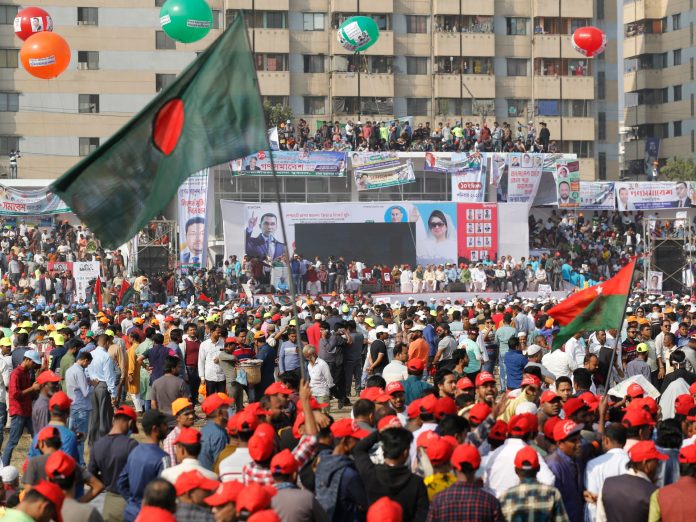 A BNP official said that some 200,000 people had joined Saturday’s rally by mid-morning. Dhaka Metropolitan Police spokesman Faruq Ahmed rejected the claim and said the venue could not hold more than 30,000 people.

“Our main demand is Sheikh Hasina resign and parliament is dissolved and let a neutral caretaker government step in to hold a free and fair election,” BNP spokesman Zahiruddin Swapan said.

The protests have been peaceful, but SWAT teams, counterterrorism units and canine squads were on standby, Ahmed said. Police have also set up checkpoints on roads to the city and increased security there.

BNP officials accused the government of triggering an unofficial transport strike to try to prevent people from joining the rally.

The rally comes a day after two BNP leaders were arrested on allegations of inciting violence. More than 2,000 activists and supporters of the opposition party have been detained since November 30 to prevent them from attending the protest.

Independent observers have reported that the past two general elections were rigged by Hasina’s government, forcing losses by the BNP.

On Tuesday, 15 Western embassies issued a joint statement, calling for Bangladesh to allow free expression, peaceful assembly and fair elections. The UN made a similar declaration a day later.

Amnesty International’s Yamini Mishra said this week’s violence showed that authorities “have very little regard for the sanctity of human life and sends a chilling message that those who dare to exercise their human rights will face dire consequences”.